‘We have become experts in suicide prevention’.

As I write this on this last day of May 2019, 31 men have seriously self-harmed or attempted suicide on Manus Island since the 2019 Federal Election in Australia. This is a nightmare within a nightmare. Most men have given up hope for their lives. The amount of people self-harming and attempting suicide is growing each day. At the same time so many men are quietly isolating and have no will to continue life. Others have been tipped over into extremely awful psychological illnesses due to the ongoing trauma of this systematic torture we are forced to endure and the fear we are expected to endure the unendurable for another three years. Despite being paid huge amounts of money PIH doesn’t seem able or willing to effectively intervene and send the men to the small local hospital. The local hospital often cannot accept them as it has so few resources or beds – not even enough for their own people. The local hospital has been put under enormous pressure. As Ron Knight, former MP of Manus Province tweeted: ‘It’s an epidemic our small hospital cannot cater to the pressure… They [refugees] need psychological help we cannot give’.

After surviving the past six years, we are highly desperate and more and more men are trying to end their lives each and every day. It is devastating to see our fellow detainees harming themselves to get rid of their unbearable pain. We sought asylum to avoid persecution and live a peaceful life but what is happening on Manus nowadays is horrific. Vulnerable innocent men have been forced into a position where they feel they have no alternative but to self-harm and attempt suicide in order to end their agony. It’s hard to believe that this kind of tragedy is taking place in this world in the 21st century. It’s a great shame for human destiny.

People are asking why these men are not successful in ending their lives. It is because their friends are looking out for them 24/7. We have become experts in suicide prevention. Those who aren’t coping and have lost their hope and can no longer to sustain their own lives are being looked after by the few men who can still keep strong and brave. We look after and take care of each other as we always have.

Those of us who have been able to remain strong enough talk to the people who have lost their hope and try to motivate them to keep going. Every strong remaining man takes on this responsibility, helping others to share their pain in order to keep these men alive. If anyone keeps themselves alone and isolated, the men who remain strong voluntarily step forward to try to help them, no matter what nationality or what language they speak. If anything happens, like self-harm or suicide attempts, refugees get to the place before the security or the authorities do.

Most of the men are not eating, it seems they are unable to, because of the deep depression and lack of appetite. So many have so quickly lost their weight. It makes them very weak and lowers their immunity. So we also try to feed the men to keep them as healthy as possible.

We are trying our best to keep our friends and brothers alive. Mental health professionals – or any other person not here – cannot even imagine what we are doing in these circumstances. It’s not easy to do this job. It is high risk and a huge responsibility that we have to shoulder. We don’t know how long it is possible for us to continue this mission. Hundreds of men are suddenly giving up.

Please follow this blog with writing, interviews and observations by JN Joniad who is in Indonesia:

World Refugee Day: Nothing to celebrate on Manus and Nauru

On this World Refugee Day people throughout the world, from all walks of life are standing beside refugees showing their solidarity and support for their right to live in freedom and safety, writes Manus Island refugee Shaminda Kanipathi*.

And this from Imran Mohammad 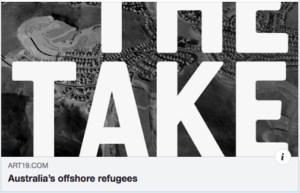