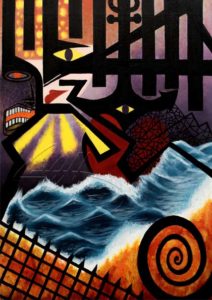 July 19 by Ellie Shakiba is an exhibition of photos and videos documenting Australia’s inhumane offshore detention center on the remote island nation of Nauru. Shakiba created the images while imprisoned for nearly six years in the Nauru Regional Processing Centre where she was held after fleeing Iran in 2013 to seek asylum in Australia. July 19 at SPARC marks the premiere of Shakiba’s images in the United States. 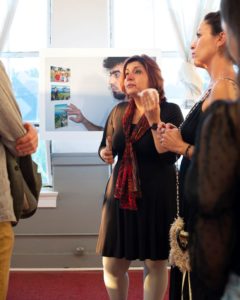 The title and opening date of the show, July 19, marks the six-year anniversary of the signing of the Regional Resettlement Arrangement (RRA) by the Prime Ministers of Australia and Papua New Guinea in 2013. The RRA built upon Australia’s already harsh policies to deter migrants attempting to reach Australia by boat. Since the fall of 2012, Australia has forcibly turned away refugees arriving in Australian waters by boat, even towing the vessels back to their points of origin, or transferred refugees to offshore island detention centers, where they face intolerable conditions for years on end. The RRA created a hardline policy in which no migrants attempting to reach Australia by boat could ever be resettled in Australia, regardless of refugee status. In the words of Shakiba “The 19th of July is the worst day of many people’s lives.”

While incarcerated on Nauru, Ellie Shakiba documented the living conditions of her fellow refugees with first a PSP gaming console and later a camera secretly sent to her. Defying strict rules forbidding recordings of any kind, Shakiba produced some of the only first-hand photos and video of the detention center on Nauru. Her bravery and journalism have played an important role in alerting the world to the plight of refugees held in Australia’s offshore detention centers, such as Manus Island in Papua New Guinea and Nauru, a tiny island nation nearly 200 miles north of Papua New Guinea. The last children held in detention on Nauru were resettled in the US as refugees in February of this year, largely in part due to the impact of Shakiba’s photos.

“Many of my stories, video, and photography were used by media outlets all over the world. I was credited with playing a major role in ending the illegal detention of children in Nauru through my media activities, documentaries, and reports.”

Her images continue to play an important role in alerting the public to the plight of the refugees still held on Nauru and Manus in unimaginable conditions. July 19 at SPARC marks the premiere of Shakiba’s images in the United States. Ellie Shakiba arrived in Los Angeles this February as part of a resettlement deal Australia signed with the US during the Obama administration. She will give a talk and walkthrough of the show at the opening event on July 19th from 7 PM to 9 PM.